After an intermission of almost six hundred years it is again a musico-cultural upsurge from the Indian subcontinent.

Don't you have much time Right now?

No issue, To know Acharya at a glance Click Here

Who is Acharya Sanjay Chakrabarty?

Save the World through Sangeet.

The Milestone Records of the Indian Music Colossus TAANSEN got a new path breaking turn with the advanced scientific researches of PSYCHO-ACOUSTICS conducted by ACHARYA SANJAY CHAKRABARTY, the Music Crusader from Indian subcontinent. His researches are based on hitherto unexplored mysteries of the perennial music of ancient INDIA, nay ASIA.

Acharya Sanjay - an world class Indian Vocalist, Instrumentalist and Composer and inventor of PRAAN SANGEET "The Science of Better Living".

Dealing best with the iconic Indian music performer – researcher Acharya Sanjay Chakrabarty sharing his sensational presence with incredible repertoire on diverse genres from classical to folk, rich with his path breaking researches on Sound and Bio Acoustics based on Indian Music.

ACHARYA SANJAY CHAKRABARTY has hence set his foot with the Good Samaritans holding high the hitherto unexplored message of his mission, "PRAAN SANGEET"

To examine further details of his persona it comes to light that ACHARYA SANJAY is an ever-stand-alone-free-thinker. He braved opposing salient serious misgivings and misconceptions prevalent so long in the thoughts and practice of BHARATIYA SANGEET (INDIAN MUSIC). Instead, he has raised high above its true image in his well-defined musical philosophy "PRAAN SANGEET". Just for a flash of example let us quote a commonly heard buzz word, that is, "Music is a performing art" which ACHARYA SANJAY contradicts saying it is never so; rather he argues, it is a very tiny part of truth, and that too may be as per the English concept of the term 'Music'. But the interpretation of the Sanskrit syllable 'SANGEET' (Music) in Indian philosophical perspectives is never limited to the smallness of 'Performance' only. Sangeet (Music) being an extensional form of 'SHABDA' (Sound) has to be conceived and experienced in its so many other different outer 'facets' and innermost 'rudiments' e.g. SANGEET (Music) is equally important for general education and public health of any country at any time.

Hence like a curious tale of reincarnation, the taste of century’s old Sages of Hindu era or Nayaks of Muslim era are revisited in the Indian Music scenario in ACHARYA SANJAY, who besides being a Research Scholar and a respectable Music Guru (Mentor/Teacher), is in the first place a Vocal Exponent (all genres from Classical to Folk), an Instrumentalist (Mainly Sitar, Harmonium and Tabla among others), a Writer(some publications are printed out and rest in process), a Composer (more than 500 already published), a Lyricist (more than 500 published and sung by famous singers), a Music Designer and a Music Director. With the virtues of all these attributes being in one person, he is also endowed with a rare calibre of a most accomplished performing artiste in presenting all variety of his own creations and compositions along with versatile traditional compositions as well. His repertoire is vast from Dhrupad, Khyal, Thumri to Ragpradhan, Modern Songs, Keertan, Film / Non-Film Songs, Folk Songs and so on.

But interestingly what made him stand on absolutely a different pedestal is evidently his long arduous research on the most intrinsic virtues of the four facets of 'Sound' (Baikhari, Madhyama, Pashyanti and Para) having roots in the bosom of BHARATIYA SANGEET (INDIAN MUSIC) about which some pioneering work had been done in Vedic age.

In this context an interesting point is to be mentioned that, Today's SANJAY - an world class Indian Vocalist, Instrumentalist and Composer and inventor of the science of better living - was awarded two 'Scholarships' when he was only 14 approx. – one was for Mathematics and Science and the other was for the most intricate genre of Indian Vocal Music 'Thumri.' 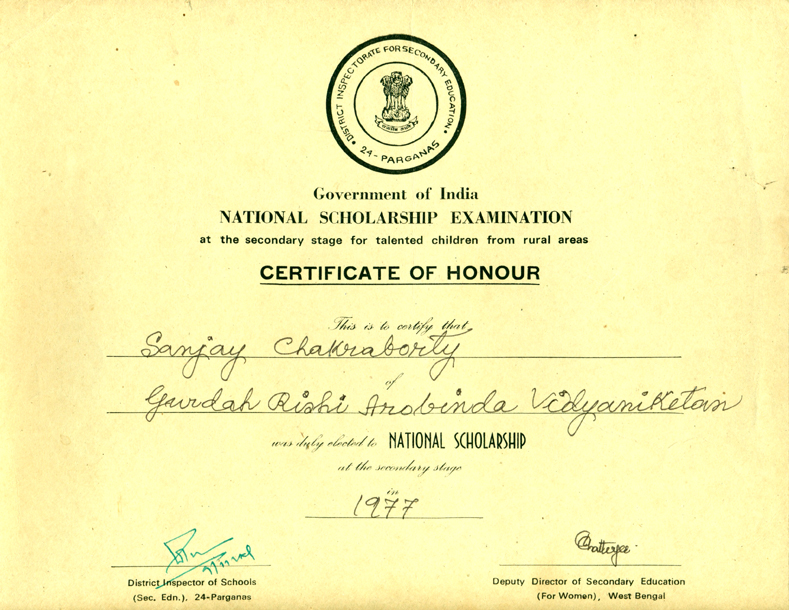 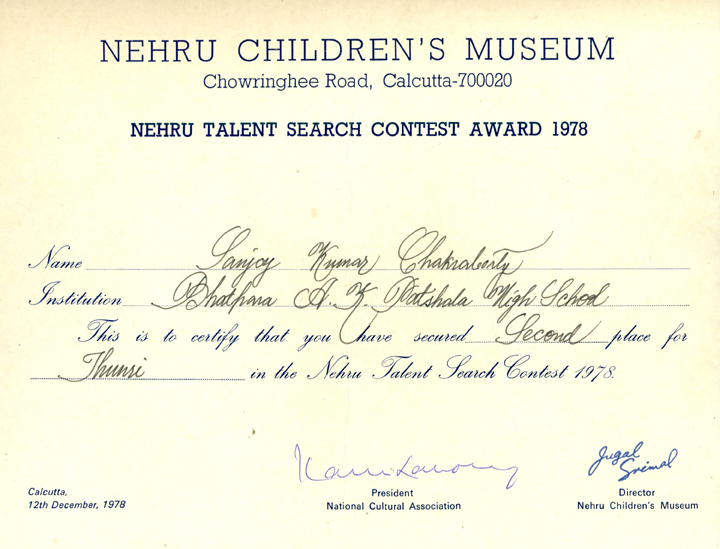 Another historical coincidence is that the musical legacy of ACHARYA SANJAY largely stems from the ancient 'Senia' Gharana (School) established by TAANSEN. This is because he learnt Sitar from the legendary maestro Pandit Nikhil Bandopadhyay and Pandit Ajoy Sinha Roy of same lineage. In his early days, SANJAY had the privilege of receiving vocal 'Talim' (training) in Patiala-Kasoor Gharana from his elder brother, Pandit Ajoy Chakrabarty, by the way of accompanying him with Harmonium in thousands of concerts round the World.

The particular process of accompaniment with Harmonium was enough for a monstrous student like young SANJAY to learn All the Intricacies of mostly all of the styles of North Indian Classical Music. In his early youth SANJAY was use to accompany all then legends like Pandit Bhimsen Joshi, Pandit Mallikarjun Mansur, Vidushi Kishori Amonkar, Pandit Vijay Kichlu, Ustad Nisar Hussain Khan, Vidushi Girija Devi, Pandit Ulhas Kashalkar, Vidushi Sobha Gurtu to competitively young maestro like Ustad Rashid Khan which included his expertise in understanding and playing North Indian Ragas mostly through all the styles of North Indian Classical Music, from Patiala Gharana (Style) to Banaras Gharana (Style) from Jaypur Style to Kirana Style or from Seswan Style to Agra Style – in every discipline of perennial North Indian Classical Music. In the years from 1986 – 87 to 1993 – 94 ACHARYA SANJAY shared one after another stages with Ustad Zakir Hussain, Pandit Swapan Choudhury or Pandit Kumar Bose as a Nagma (Rhythm/Taal Cycle) player which created a deep foundation of his mastery over the nitty-gritty of the timings of Music at a tender age. Finally Music is the doll of TIME.

ACHARYA SANJAY stood opposed to privatizing the divine gift, that is, Bharatiya Sangeet (Indian Music) within the orthodox frame of feudalistic ideology. Rather his sole determination was to thrash out the true image of Bharatiya Sangeet (Indian Music) and then democratize that 'gift' to million commons for whom 'Bharatiya Sangeet' is the absolute birth-right. This being a whale of a task SANJAY had to shun arch lights, stop his so acclaimed stage performances and embrace a plain lifestyle only to sit in silence with his solemn researches for over long three decades. His dream was to bring the priceless property of Bharatiya Sangeet to the services of mankind nationally and internationally. Gradually the dreams of ACHARYA SANJAY turned into truth. PRAAN SANGEET is a reality now. His musical incantation 'PRAAN SANGEET' is as it were put on the wheels of an automated vehicle of prowess which is sure to carry myriad enthusiasts to their desired plateau of success in much lesser time and toil than needed.

Today Indian Music is under a deadly threat. Hence his so magnificent calibre of stage performance which includes materials for general academic education with implied medical effects is a crying need of the hour for disseminating the seeded message of PRAAN SANGEET everywhere in society including even the remotest corners of the country and abroad. HENCE WE MAY BE ALLOWED TO RAISE OUR VOICE ON A BELLIGERENT PITCH TO PUT UP THIS CLARION CALL TO ALL OF YOU, THE MIGHTY HUMAN BOND, WHO CAN ONLY DEFEAT ALL EVIL SPIRITS STANDING POWERFULLY AND TAKE A BREAST-FULL OF PURE BREATH FROM THE VAST HORIZON OF PRAAN SANGEET, THE UNFAILING GATEWAY TO THE SCIENCE OF BETTER LIVING AND A BETTER TOMORROW.

A visionary, thinker, vocalist, instrumentalist, composer and lyricist, SANJAY has grown to be a complete exponent musician over the years (For details please go through different pages of this website).

Update Required To play the media you will need to either update your browser to a recent version or update your Flash plugin.

because earlier humans were inventing technology
but nowadays technology itself invents technology & technology guides us what to do.
A time will come when humans cannot compete with machine and will gradually get lost.

Be a part of us and Save the World with "Praan Sangeet " (Music for life).

Update Required To play the media you will need to either update your browser to a recent version or update your Flash plugin.
Join Praan Sangeet
Contact for "Praan Sangeet" Demo
In School/College/University